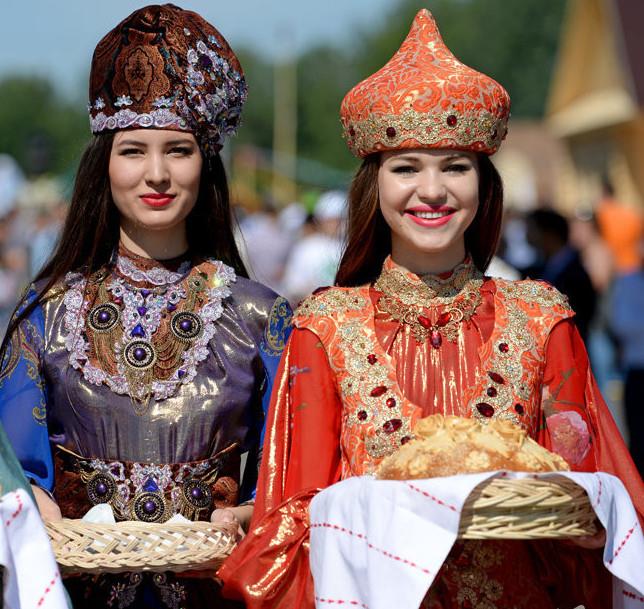 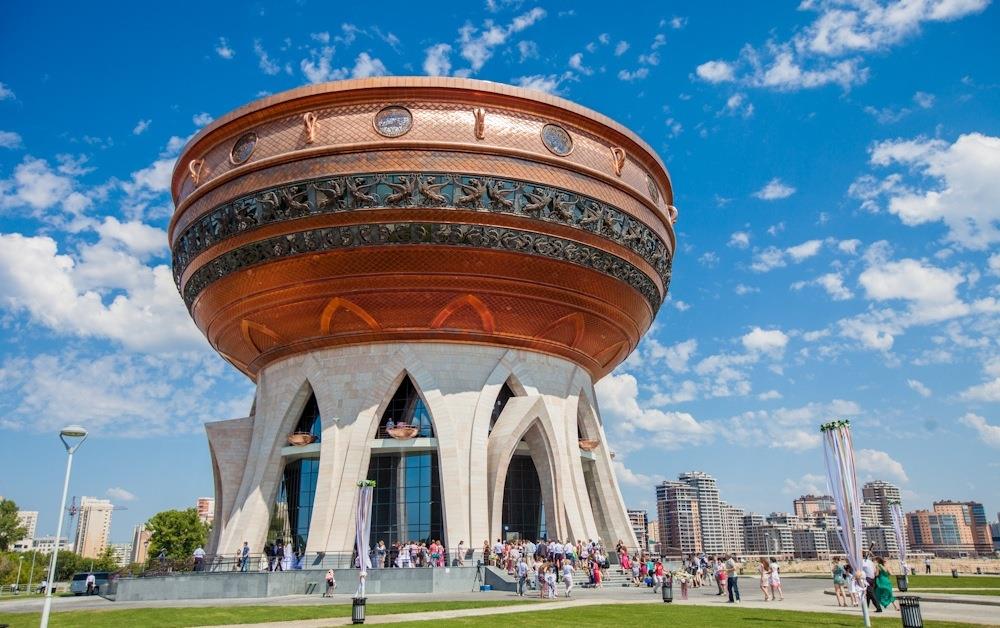 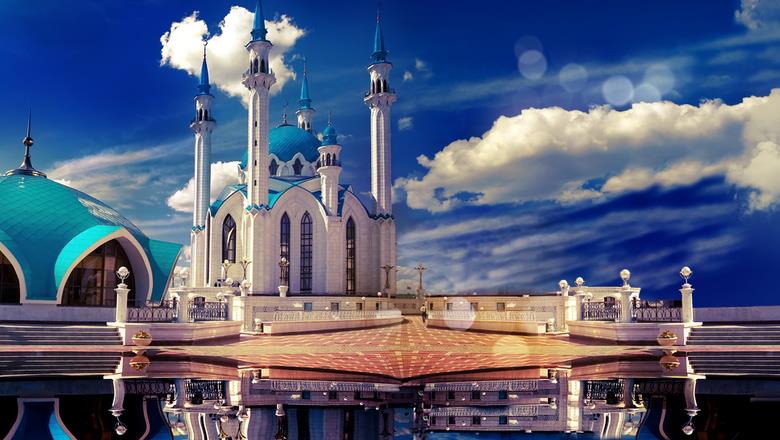 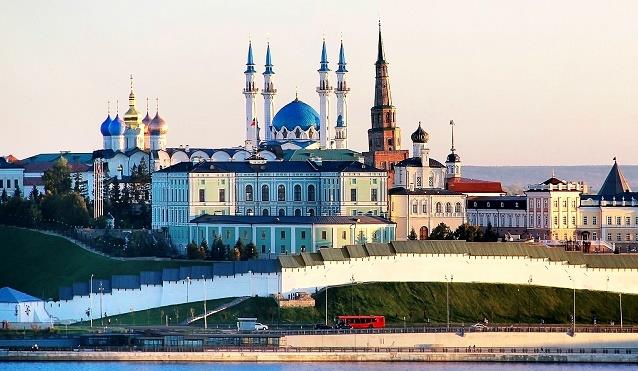 Arrival at the airport in Kazan.

Legends and Mysteries of the Millennium-old Kazan

Bus and walking sightseeing Legends and Mysteries of the Millennium-old Kazan by bus. Enjoy the original beauty of Kazan, see the bright colors of its streets and squares with your own eyes, learn where teeming treasures of Khans of Kazan are kept and where water boiled in a cauldron with no fire by taking the sightseeing tour. The sites of the millennium-old city combine the culture of the West and traditions of the East: Old Tatar Settlement where Tatar residents lived from the 16th century, Textiles Settlement originating as a result of industrial reforms by Peter I, fountain squares, Kaban lake with its mysteries and legends, a simulated Tatar village Tugan Avylym (My Native Village), a new building of the Puppet Show, Kazan Federal University, Liberty Square as a cultural and administrative center of Kazan. During the sightseeing tour, you will see a variety of minarets and cupolas, crescents and crosses, which is a proof of a good neighborliness of the two native peoples - Tatars and Russians.

Lunch in a restaurant.

Lunch in a restaurant. OPTION (EXTRA FEE) - Folklore program Yakyn Duslar will immerse you in the world of the ancient culture of the Tatar people. Each people of the world is unique, and its soul, hidden in spiritual creativity - folklore, is unique. All tourists have the opportunity from the first minute of their stay in Kazan to touch the age-old culture of the Tatar people.

A walking tour White-stone Fortress. The Kazan Kremlin is the main sight of the city; it is a UNESCO world heritage site. The Kremlin is an official residence of the President of the Republic of Tatarstan and a state museum-preserve attended by thousands of tourists every year. The white-stone Kremlin is the heart of the ancient city that incorporates the culture of the East and West. Minarets of the main mosque of the city - Qul Sharif - shoot up into the sky, and cupolas of the Annunciation Cathedral, oldest one in Kazan, shine with gold. Inside the fortress, there is one of the symbols of Kazan - the famous leaning tower of Tsarina Suyumbike. OPTION (EXTRA FEE) - Master-class The Art of Arabic Calligraphy. Under the guidance of a skillful master you will get to know the art of Arabic calligraphy, learn: what is kalami and how to use it, what is the Arabic alphabet, the correctness of writing Arabic letters, words, etc. Taking the Kalami (pen) in hands, on beautiful postcards you will be taught to write your names with Arabic script.

National Museum of the Republic of Tatarstan

The museum occupies the building of the former Gostiny Dvor, which is a monument of architecture and history of the Russian Federation and the Republic of Tatarstan. The museum's funds were formed throughout its more than 120-year history with the participation of scientists from Kazan University and the Academy of Sciences of the Republic of Tatarstan, Kazan collectors. The museum collection numbers more than 850 thousand exhibits and reflects the history, culture and traditions of the peoples of the Volga region and Russia, Western and Eastern world cultures. The exhibits are presented in the expositions The Ancient History of Tatarstan and Kazan Province in the XVIII Century.

Check-in at a hotel. Leisure time.

OPTION (EXTRA FEE) - Night city tour The Lights of Kazan
Do you know how streets of Kazan were lit before the electricity? You don't? If you are still full of vigor after an extensive sightseeing program and want to see a different Kazan, to hear about a different Kazan, then you are invited to immerse yourselves into the fairy-tale-like image of the capital. Kazan will show itself to you quiet and peaceful, but still full of lights from back-lit historical and modern buildings. The tour will take place in the brightest sights of the night city.

Meeting at the hotel lobby

Departure for the sightseeing program.Kazan - Yoshkar-Ola

Bus and walking sightseeing tour The Amazing Yoshkar-Ola. Yoshkar-Ola is the capital of the Republic of Mari El. Yoshkar-Ola underwent a sea change during the last decade: the downtown was virtually rebuilt anew. So, we are not going to Mari El for history covered with dust of centuries, but to see the present-day life of the main city of this region of Russia. One of the main sights is the Square of Obolensky-Nogotkov. There are several administrative buildings there, as well as the national fine arts gallery, where a replica of the Tsar Cannon is placed at the entrance, a monument to the founder of the city Prince Obolensky-Nogotkov, a monument to the Saint Martyr Leonid - Archbishop of Mari. Moreover, there are the Mari Chimes - a clock at the gallery building that demonstrates one of the symbols of the Christian faith. See a clock with moving figures of Saint Apostles - the eight minutes of the Evangelic miracle. Sit on bench next to the Cat of Yoshkar-Ola that brings luck to travelers that pat him. See a monument to Pushkin and Onegin - one of the Pushkin's literary characters. Visit an open-air museum of fairy-tales.
Lunch in Yoshkar-Ola with meals of the national Mari cuisine.

Meeting at the hotel lobby.

Departure for the sightseeing program.

Folklore program.
Bus and walking sightseeing tour the Capital of the Chuvash People. The city of Cheboksary, the capital of the Chuvash Republic, is located at the right bank of Volga river. A wooden log fortress was built on the shore of a Volga bay on the order of Ivan the Terrible in the 16th century. It got the name of Cheboksary. The tour through Cheboksary includes sightseeing in the old part of the city. You will see the embankment, which is one of the most beautiful on Volga, the bay of Cheboksary, a gem of the city, a monument to love - Taganait, a monument to Vasily Chapayev, a sculpture of Mother the Patroness, an even a monument to Ostap Bender and Kisa Vorobyaninov in Merchant Yefremov Boulevard.
Lunch in Cheboksary with meals of the national Chuvash cuisine.
Participate in the program Let the Soul Enjoy!. It is an entertainment ethnographic program demonstrating rituals, customs and traditions of the Chuvash people. Taste a Chuvash national drink, which is beer (a replacement by juice is arranged for children travelers.).

Meeting at the hotel lobby. Check-Out. Departure for the sightseeing program wit

A walking tour The Island Town of Sviyazhsk

A walking tour The Island Town of Sviyazhsk. Sviyazhsk is a historical and cultural gem of the Republic of Tatarstan. At present, the place where an ancient fortress used to be is surrounded with waters of Volga river. In the past, the fortress served as a military outpost in the Volga region and a place to prepare troops for an assault against an unassailable fortress of Kazan. In the course of time, as its value as a military facility diminished, Sviyazhsk became a spiritual center of the Middle Volga. The sightseeing tour in Sviyazhsk comprises unique monuments of history: the Cathedral of the Joy for All Who Grieve, one of the oldest wooden temples of Russia - the Holy Trinity Church, an operating Assumption Monastery featuring an architectural ensemble of the 16-17 centuries, Stable Yard, workshops.

Lunch in a restaurant.